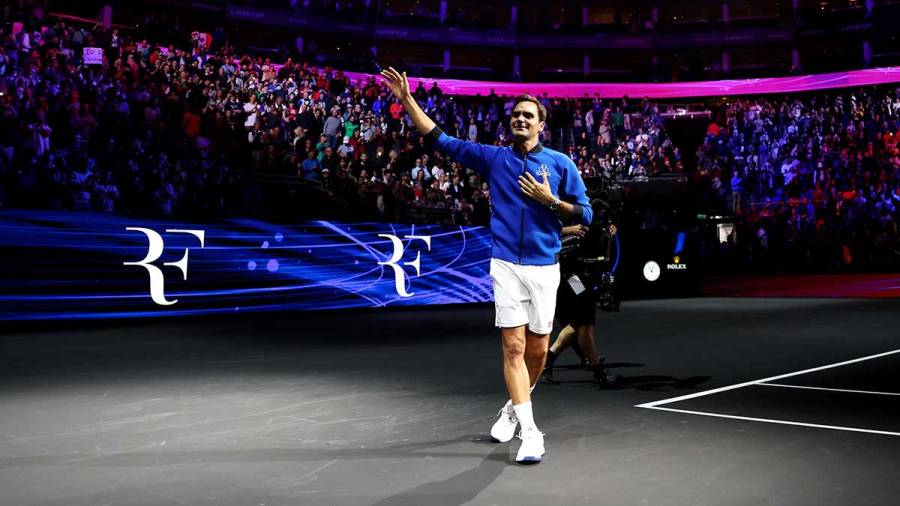 When the news of Roger Federer’s impending retirement came, I, like many, had expected that it would come sooner rather than later. After all, he had been struggling with a knee injury for over a year and he wasn’t getting any younger. However, it’s not because I expected such news to come that it made seeing the Swiss’s Instagram post and message any less hard. I cried. In front of my class to boot.

For this important moment, his last ones as a professional player, Federer chose to play the tournament he helped create, the Laver Cup, and to play only the doubles with the partner of his choice: his rival become close friend, Rafa Nadal, his other Big Four rivals, Novak Djokovic and Andy Murray, among his teammates, his whole family and team in the O2 Arena. It was fitting.

Again, it didn’t make things less hard, because the greatest player in the game was saying goodbye.

Emotional from start to finish

Thanks to TSN, who decided to show this final match of the great Swiss with no commercials, I was able to enjoy this moment without interruption. And what a moment it was! From Roger and Rafa entering the court with captain Borg, then seeing that Mohamed Lahyani was the chair umpire, I welled up. I admit that this was of short duration because not only was the tennis superb, as are almost all doubles matches, the relation between the players made it so that I laughed and laughed many times.

However, when the last ball fell, that’s when the emotions started for everyone, in the O2 or home. Roger started crying. A champion never afraid of showing his emotions, which made him even more human to those following the game, he let it all out. The end of 24 years of traveling the world for him, the end of 24 years of greatness for us.

The end of an era.

But what got me seriously crying, well, weeping, really, was seeing Rafa Nadal’s tears. He was inconsolable. Yes, the whole team was in tears, as was the rival team and everyone in the O2, but Rafa’s tears are what got to me the most and started the biggest sports waterworks I’ve ever had. Roger and Rafa were first rivals, then became friends, then even greater friends. Tennis sort of joined them at the hip, but Rafa’s genuine emotion was, to me, the most poignant moment.

The cynicals said that he was crying because he knows that he is the next one to go the R route, and he probably is. However, what he said in press, that one sentence, is the embodiment of his on-court unstoppable emotion. As I said, the game has joined them at the hip over a decade ago, but respect and real, true friendship made them even more the stuff of legend. As I said many times on my social media accounts, they are true friendship goals.

During the long moments of Roger’s farewell ceremonies, there came this on-court interview by the always excellent Jim Courier (who I admire even more for not having broken down as we all did and staying composed no matter how he must definitely have felt; what a professional!) and the moment when he completely came undone thanking his wife, Mirka, and his four children, breaking down when he tried to say “13 years ago”, referring to the birth of his first set of twins.

For those who still doubted it then, I think that this spoke volumes: Mirka has been Roger’s rock, especially after the birth of their second set of twins, when he wanted to retire and devote himself to his family. As he said on court, she didn’t want him to, and made everything possible for him to continue playing for has long as he could. Watching him, afterwards, hold her tight tight tight was one of the most beautiful moments of the ceremony. Then him telling his crying and emotional children that he was not sad, that he was happy, that all will be well, was just as moving.

For all of everything, thank you

A great athlete never afraid to show his emotions, a true gentleman on and off the court, a person who transcends the sport where he has become the greatest for those very qualities, an amazing champion, a great person, a true family man.

For me, that is what Roger Federer embodies and represents and, in my opinion, the reason why most everyone was, for once, united in saying goodbye to the greatest of them all, regardless of who they are fans of.

This is what Roger Federer is.

For this, and for all of everything, thank you, Roger. Merci pour toutes ces années et bonne retraite bien méritée!

One thought on “Thank you, Roger!”